“The impunity granted to Turkey must come to an end, the law must be enforced and justice must be served”, said Theo Theodorou, spokesman for Lobby for Cyprus.

“For too long Turkey has ignored agreements it has agreed to, but this breach goes further: it is a crime in violation of the Fourth Geneva Convention of 1949”, he said.

Theodorou was commenting on a report by Turkish Cypriot newspaper Afrika, claiming that Greek Cypriot detainees had been buried alive near a river in Adana, Turkey. The paper also reported the existence of a mass grave near the church of Apostolos Varnavas in Turkish-occupied Famagusta which is said to contain the bodies of Greek Cypriots from surrounding villages.

According to Theodorou: “The report of a deportation followed by cold-blooded murder symbolises the brutality of Turkey and its flagrant disregard for international humanitarian law, as well as fundamental human rights. The report also highlights the long-standing failure of Turkey to comply with the law by conducting proper investigations into the criminal misconduct of its armed forces in the Turkish occupied north of Cyprus.” Theodorou added that “the victims of this crime were denied their right to dignity, their right to liberty and, above all, their right to life. To make matters even worse, the families of the victims were denied the opportunity to know what happened to their loved ones, let alone the opportunity to see the perpetrators brought to justice.”

The newspaper also quoted a Turkish soldier to the effect that: “If we take them to Adana, too, we will do what we did to the others… [W]e took the others, tied their arms and legs and buried them alive near a river there; we didn’t waste any bullets. Because we buried them on the riverbank, the river will carry them away with the passage of time and no trace will be found.”

Historians who know about the World War One Ottoman genocides against the Armenians, the Assyrians, and the Pontic Greeks will know that that sort of killing was used when the intended victims were near large bodies of waters, such as rivers and the Black Sea. Back then, the tactic often was to tie together 10 or 12 men, kill only one – “to save bullets” – and then force the remainder into the water so that the one dead body would eventually pull the others underwater.

The matter has come alive at this time, Theodorou explained, because the Committee on Missing Persons in Cyprus has been charged with looking into the report of the mass killing in 1974.

“I am not optimistic that anything will come out of the investigation”, Theodorou declared, “first, because Turkey still leads a charmed life in the West when faced with charges of atrocities like this, second, because the government in Ankara helps to fund the Committee and thirdly, because the Committee has limited terms of reference. These prevent the Committee from attributing responsibility for the deaths of any missing persons or to make findings as to the cause of such deaths.”

Individual or mass forcible transfers, as well as deportations of protected persons from occupied territory to the territory of the Occupying Power or to that of any other country, occupied or not, are prohibited…
Article 49, Fourth Geneva Convention

Theodourou went on to call for Turkey to be held to account: “The language of the Fourth Geneva Convention is clear: ‘Individual or mass forcible transfers, as well as deportations of protected persons from occupied territory to the territory of the Occupying Power or to that of any other country, occupied or not, are prohibited, regardless of their motive… The detaining authorities shall ensure that internees who die while interned are honourably buried, if possible according to the rites of the religion to which they belonged and that their graves are respected, properly maintained, and marked in such a way that they can always be recognized.’ The challenge is there for the United Nations to act honourably and take proper steps to enforce these provisions, as they have done elsewhere,” he concluded.

Greek Cypriot prisoners in 1974 being transferred to Turkey. Some of the people identified in this photograph are unaccounted for. 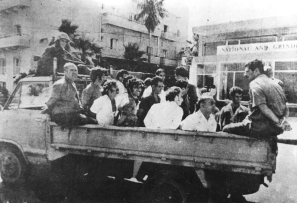 Greek Cypriot prisoners being transferred to Turkey. This photograph appeared in Turkish newspaper Hayat on 19 September 1974. 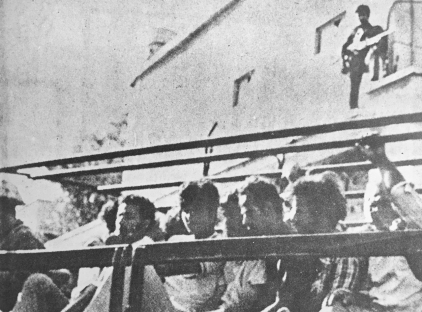 Greek Cypriot prisoners being transferred to Turkey by Turkish troops in 1974. 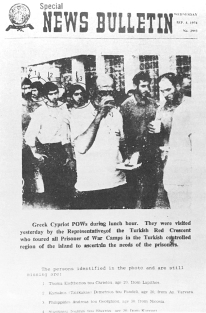 Turkish Cypriot publication ‘Special News Bulletin’ on 4 September 1974 showed Greek Cypriot prisoners being held by Turkish forces in the occupied area of Cyprus. They had been visited the day before by the Red Crescent. Four persons, identified in the photo were listed as missing: Thomas Eleftherios tou Christou from Lapithos, Kyriacos (Tzirkakas) Demetrios tou Panteli from Ayios Varvara, Philippides Andreas tou Georghiou from Nicosia and Stavrinou Ioannis tou Stavrou from Kapouti.

Enforced disappearances: many Greek Cypriots who were taken prisoner by Turkish troops in 1974 were transported to jails in Turkey. Despite evidence of them being in Turkish custody, the fate of many is unknown. Click images to enlarge.